The third and final workshop in the series focused on bringing together the ideas from the previous sessions, firming up the assets that we felt were important to map, and considering how we might (as individuals and organisations) use them better.

Because we were keen to work slightly differently at this workshop, we brought together a smaller number than the previous two sessions. This was important as we were keen to help people map their personal assets, which could be considered quite difficult to do in a large group. This meant that there was 10 people at the workshop (5 people who use services, and 5 who support people who use services).

What did we do?

1. What does well-being mean to me?

We worked together in two groups of seven people (including facilitators) to think about how we feel when we are well, and the types of things that we do to help us continue to feel this way. We wanted to capture this at the beginning of the session so that we could refer back to this when completing the other activities. We were keen to encourage people to be aspirational when completing their well-being statement. 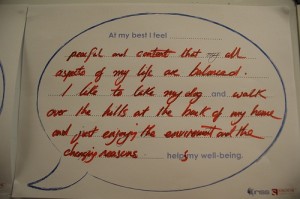 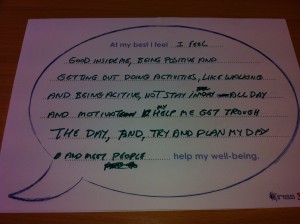 The types of activities that people talked about doing to keep well were similar to those that had been discussed in previous weeks and centred around:

This activity worked well as a good ice-breaker, unearthing a lot of commonalities within the group and providing talking points. It got people talking about themselves – something that can be quite difficult to do in groups.

2. Review of the map and generating ‘tags’ 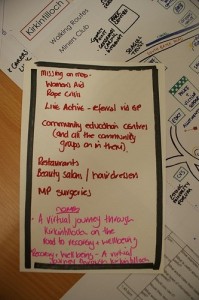 We worked together at this stage to review the community map so far and to think about what assets might be missing. It is amazing that whenever we bring together new groups of people to do this exercise the amount of new information that we learn and share!

Some of the new assets we mapped included: 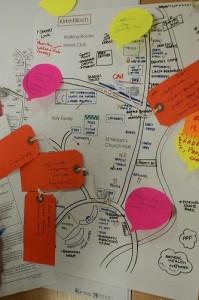 In general, the groups were pleased with the range of support services that were covered on the map, but wanted to understand more about how to access them.
We were interested in gathering feedback on the types of categories that many of the services and supports may sit under, and used luggage labels as ‘tags’ for people to write and draw their ideas on.
on.
“Searching” and “tagging” were difficult concepts for the participants to get their head around. Some of the ideas that we came up with included: 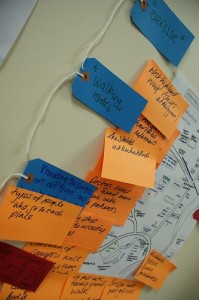 One of the interesting things was the recognition from the groups that the map would need to work on a number of different levels. It would need to:
In addition, there was some discussion around the ‘help yourself’ guide produced by Ceartas for dementia and whether or not something like this could be produced for mental health. 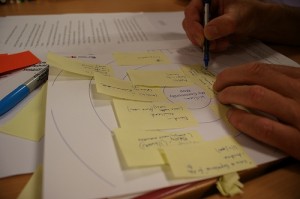 For the next activity we asked people to work in pairs to consider their own personal assets. We asked people to draw or write a map of all of the different affiliations or communities of people they belong to (including moral support, access, resources etc.) that they thought were useful for their well-being. We broke this down into three categories that are most important to them: 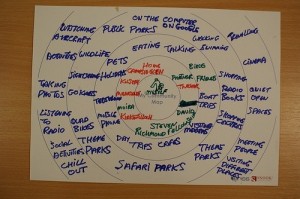 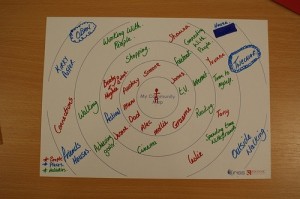 We then asked people: 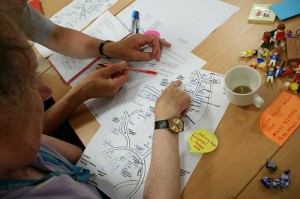 This was an excellent exercise for people to do as working in pairs, people were able to spark off different ideas off one another and build their maps together. When we asked about what surprised people, the following comments were made:
made:
“It makes me feel very lucky”
“It reminds me of what I have”
“I’m surprised at how much I have very close to me”
“It made me see the progress I’ve made”
“Its been great to get a chance to think about me, just me”
made:
People thought that they would be able to use these personal maps in a variety of ways, from doing the exercise again in 4-6 months time so that you could see if anything had changed, using the maps to think about any gaps that they have in their lives (and thinking about what might help address these gaps), and using the maps to see how far they have come.
come.
When asked about what would help people to use the community supports indicated in the large community map better, participants talked about simply knowing what was out there, and how to access it. Some participants talked about needing some support to try things out for the first time – be that from a support worker, a family member or a friend.
We were very careful to show some examples of what these maps could look like before beginning the exercise in order to reassure participants that it would be ok to not have very much on the map. We were also keen to be sensitive to the fact that people may not have wanted to discuss their personal assets, and were planning to use the hypothetical examples in order to get around this.

In reality, every participant in the group was happy to complete their map. Moreover, they all commented, in one way or another, what a positive experience undertaking the activity had been for them.

In the last session after lunch, we talked about different ways of presenting the data and information we’ve been collecting over the past month. Participants were given a range of different examples of other online visualised maps from across the world.

We were asked people what was useful and not so useful about these different types of visualisations and what they felt would make them better for the purposes of this locality and in their area. 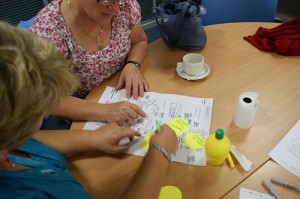 Some of the ideas that people came up with for the map included:

We were keen to ask people who should be able to upload or update data/resources on the map. The group thought that there should be a representative from each of the specified organisations that would update their own information. There were some reservations about ‘just anyone’ being able to upload information and as such the majority of people thought it should be moderated in some way. Mostly, I think this was due to understanding what community populated websites are like and the type of input that would be involved. 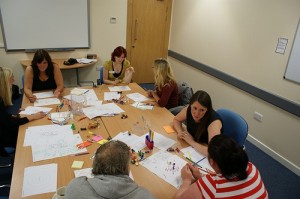 We had a lively discussion at the end about how best to categorise the difference between community and traditional support services, which was similar to the discussion that took place earlier in one of the groups. We thought that a useful way around this would be appropriate tagging – but that some versions of these tags should be circulated around the organisations and posted in the blog to make sure that we get them right. 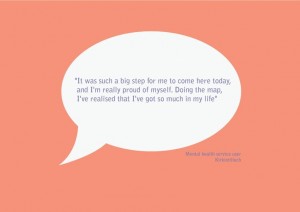 This session was focused on bringing the community elements that we’ve been mapping back down to focus on individuals, and working with people to understand how they could use community supports more. We also wanted people to understand more about the outputs of the project and to have their say in its development and to have them consider how they could potentially use it.

The focus of the project has been on understanding whether or not an asset based approach could be applied to the field of mental health and how its use could reveal existing capacities within the community and in individuals.

I’ve been reflecting on the last session and I think its success was based on looking at people’s personal assets. It was incredibly powerful to see and hear people appreciating and being astounded at all of the different valuable things that they have in their lives and considering the steps that they could take to both strengthen what is there already as well as develop new networks and ties. It was an exceptionally rich process which created a lot of discussion.

This has a lot in common with the recovery based approaches that the service providers in the area are using to help people with mental health problems take control over their journey towards wellness. What we’ve hopefully achieved through this process, is to consider more creatively how providers can work together with people using services to consider how they understand themselves, their well-being and the support and services that might help them in the process of recovery.

I think the process that we’ve gone through over the past three weeks links quite neatly into much of the wellness and recovery action planning (WRAP) work that is already going on in a variety of different ways in the area. Hopefully the process, as well as being useful for the people who use services, has also given practitioners some more tools for their toolbox.

Perhaps the most thought provoking of all was that people recognised that their lives were quite full and that they hadn’t realised or recognised it for a while. The process has shone a light on the value of making things visual and working in 3D.

I’d just like to thank all of the people who have given their time, engery, ideas and enthusiasm by coming along to the workshops and sharing their experiences and knowledge. Truely, the project would not have been possible without you. I hope you are pleased with the end result!

Over the coming weeks, I’ll be working to qualitatively thematize the outputs from the four sessions. This will culminate in:

Keep watching this space for the first few glimpses of what the outputs might look like – we’d be very happy to get your views and reflections.
More to come soon.
Tags:assetscommunityinspirationalkirkintillochmapspersonalvisualisationwell-being