One of the things that we are really keen to do is to share the learning from this Kirkintilloch project far and wide so that others can use and adapt the process that we’ve gone through to better understand the resources that are available in the communities in which they live.

We were invited to come along and give a presentation about the project at the ALISS (Access to Local Information to Support Self-management) event on Tuesday 25th October.

One of the things we did was to showcase some of the different approaches to mapping that we tested in Kirkintilloch. Some photographs from the event are available here: 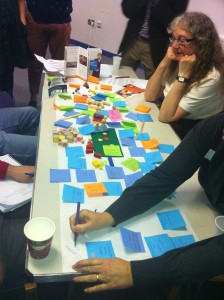 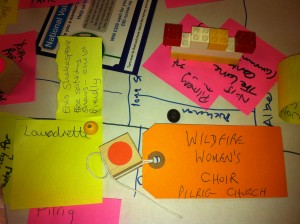 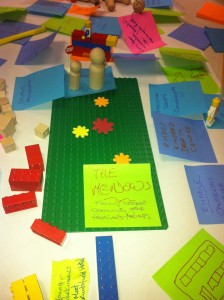 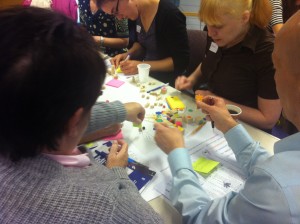 This was just a taster session and I think we were a bit ambitious to think that we could begin to map out some of Edinburgh’s self-management resources in a little hour session. It was mostly about showing people a new approach, and giving people a method for which to start thinking about collecting the different resources that are available, as well as learning something new about the area in which they work. We came away with a wealth of knowledge and information which will give a helpful baseline for which to build on.

This wide range of ‘assets’ or resources, came out of conversations, scribbles, post-its and using 3D shapes. Maybe they popped into peoples’ heads when something related was mentioned or when they spotted something on the map, but what it seemed to do was to help people think about self-management in the widest possible sense – enabling them to think outside of ‘traditional services’. And that is one of the things we like best about using assets as an approach – it is not just about positive language it is reframing how people think.

Beyond developing a map of resources, we’ve also found the process to be useful in  promoting connections or relationships between individuals, between individuals and organisations and between organisations. This certainly seemed to be happening on the day, there was a really good buzz in the room – with even some talk about establishing a local network of people interested in self-management.

We asked people how they found going through the process and received a really positive response. Additionally, there were lots of suggestions as to how it could further be developed, including: