Our world tour of East Dunbartonshire continues on schedule with a visit to the Torrance Caldwell Halls where we were assisted and supported by the Caldwell Hall Champions Cathy and Rona.  The Caldwell halls are a charitable organisation run by the local community that aims to promote a sense of community connectedness.

However, despite torrential rain, 5 people attended and helped us create an asset map of the Torrance area. Although the event had relatively low numbers it provided an opportunity for participants to learn what assets they have at their disposal and how they feel about their local community. 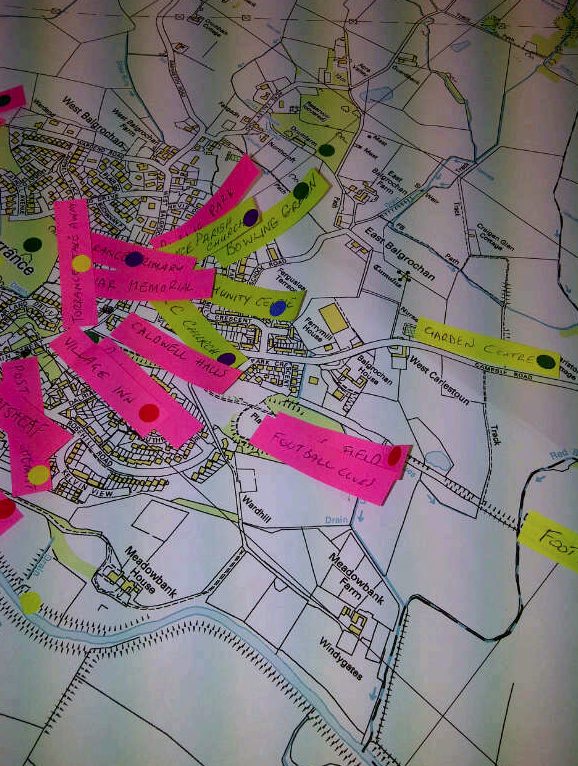 One of the key features described by local people (similar to Twechar) was their access to green and open space – particularly the River Kelvin and the Forth and Clyde canal walkways “this has enabled a lot of community groups to become established such as the Ramblers association, fishing and cycle clubs which all enjoy the natural assets available”.

Many people recounted stories of how they used to play with their friends beside the disused Tower Bridge “it was the best swing ever!” indicating how much these elements of the local landscape means to people, but also highlighting features of the landscape that have the potential to be developed and used differently.

We heard how a lot of new “assets” have recently been developed to improve the local area including:

We had a great opportunity to talk at great depth with Cathie and Rona who know the area like the back of their hands! We were able to hear about what Torrance is like now, but more importantly, we were also able to hear about their future vision of how Torrance could be, and how it its currently a great asset to those who live there.

Some quotes from the day:
“Great place but could be better if we had improved transport”
”lots of walks and open spaces”
“The local pub grub is great”

It was really interesting to hear how people began to think a little bit differently about the different assets that were described. For example, many people hadn’t originally seen some of the local businesses as an asset, but were then able to consider the different contributions that each of them made to the feel of the area. Most importantly, people began to think of Torrence itself as an asset – which was lovely to hear!