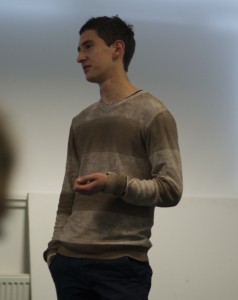 This group defined their approach as ‘Interaction between different stakeholders in the system’. These stakeholders include older people, carers, service staff and family and friends. The group tried to map this system (see slides) but conceded that doing that created a ‘mess’ and stated that the system is incredibly complex for someone who has never experienced the system. Not only was there complexity in the navigation of services, but also confusion around identifying where to enter the system. The implications of this were difficult to comprehend. It seems the students, on looking at the system for the first time, are actually experiencing what it would be like for anyone else trying to navigate their way through the system for the first time.

This group went to a BUPA care home for people who have dementia – a NHS unit and a social work services – to consider partnership working and communication from different perspectives. They also met with older people and carers, which they said was useful because it revealed that older people were not all that different from themselves. They wanted basic things the student believed they would want when they are older, such as being safe, and being independent enough to take a shower on their own (‘the shower of life’ as one older person called it).

The group created detailed maps of how people have approached and experienced services, and how they have navigated through them (see slides). The group extrapolated this to look at how this interaction might impact upon a person’s life and their health.

Problems expressed by people in these experiences were that navigating the system was quite intimidating, especially when people didn’t understand who, what and why services were involved in their lives. They asked people where they thought the problems lay in the services they had experienced and took their lead from the insights they gathered. One issue that was specifically mentioned was around how pride can affect people’s willingness to engage with services.

This group presented the bud of a few ideas, which included: the development of a ‘super social worker’ which still needed to be thought about and fleshed out, trying to reduce the gap between certain stakeholders and providing a clear view of the system and its connection to other services, resources and people.

There was a lot of discussion about assessments after this group presented, as well as feedback from the audience which included: 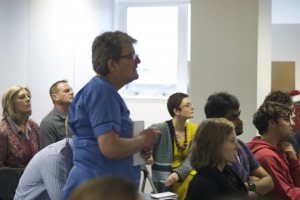 Super social worker – could be a GP, someone who is already naturally connected in the community to people.

Patients – clients – people: need to think about how these words are used. One practitioner shared that she does not think of people as sick, but rather that they are her clients that she is providing an assessment for so they can access a service.

Pride and respect need to be considered – knowing what your entitlement is and how you prefer to learn about this.