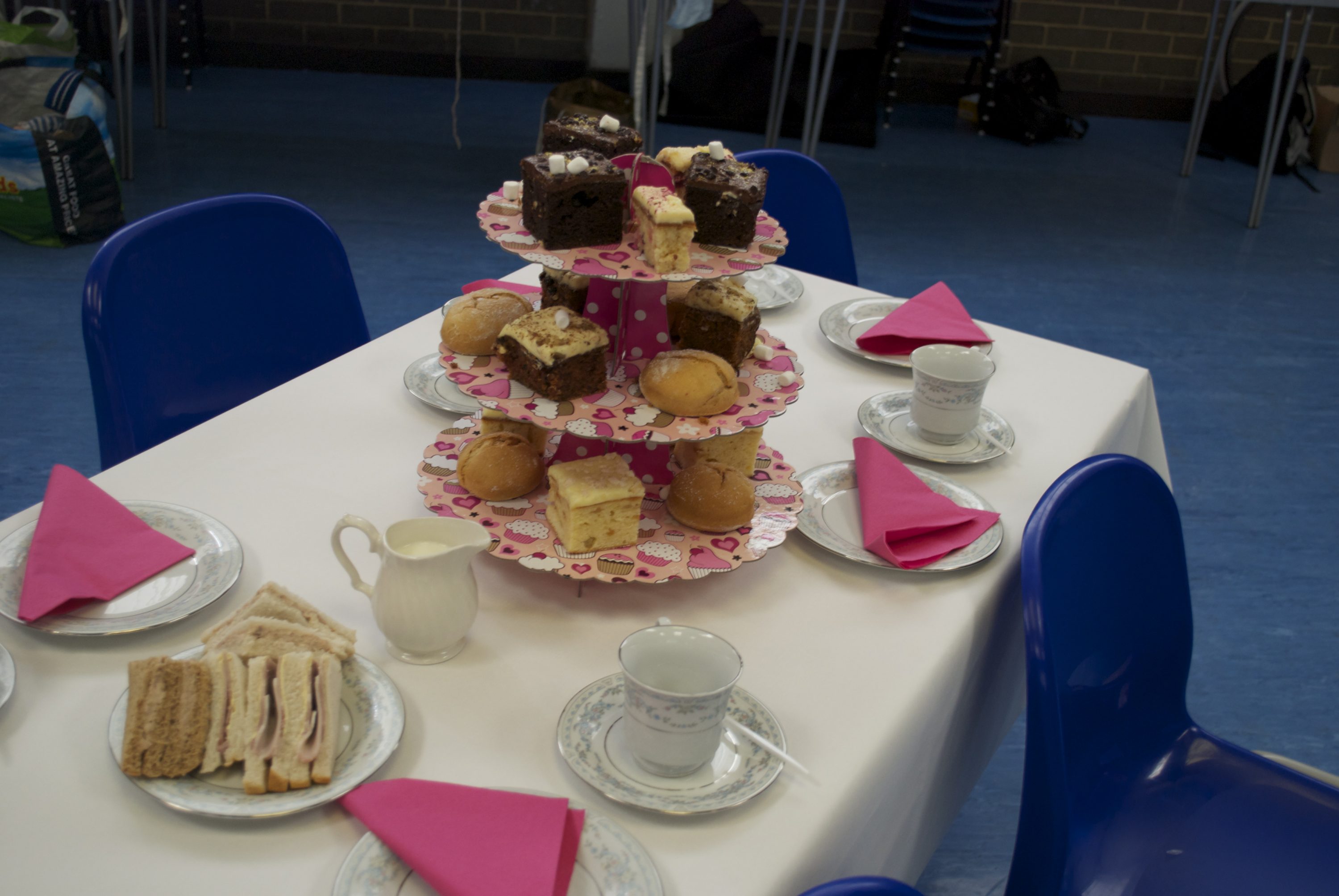 Hello there folks. It has been a while (16 months) since we last posted from this blog – but sometimes it takes a while for mighty oaks to grow from tiny acorns!

Our last post highlighted that we were working together with the Glasgow School of Art to develop new and innovative approaches to meet the social, economic and environmental difficulties we are currently facing around reshaping care for older people. Since then, we’ve seen the innovation in this sector developing rapidly. Responses have been emerging from across the public, private and voluntary and community sectors. Frequently, these innovations have involved new technologies or making better use of previously under-utilised assets and resources. And these innovations are not all small (or tiny, to use the previous analogy!).

When we left you last, the ideas that had been developed between people who use services, practitioners and design students, had been showcased and received well at the IRISS forum.  However,  we weren’t sure who/how/when they would be taken forward.

We are delighted to tell you that since those early stages, two of the ideas developed through the project have been taken up and developed by different partnerships in the local area.

In partnership, a group of staff (comprising the Health Improvement Team, social work and NHS) approached Blackfriers Primary School in the Gorbals to set up a pilot initiative that would bring generations together. The programme is in the early stages of design, but has the aim of improving perceptions and challenging stereotypes, and the overall programme will be co-produced by the children and older people.

Monday 20th May, saw the launch of this programme. Attended by over 80 older people, carers, grandparents and parents and the children from primary 1 and primary 7 from Blackfriars school, there was a buzz in the air, song in our hearts and plenty of cake to go around (just!) 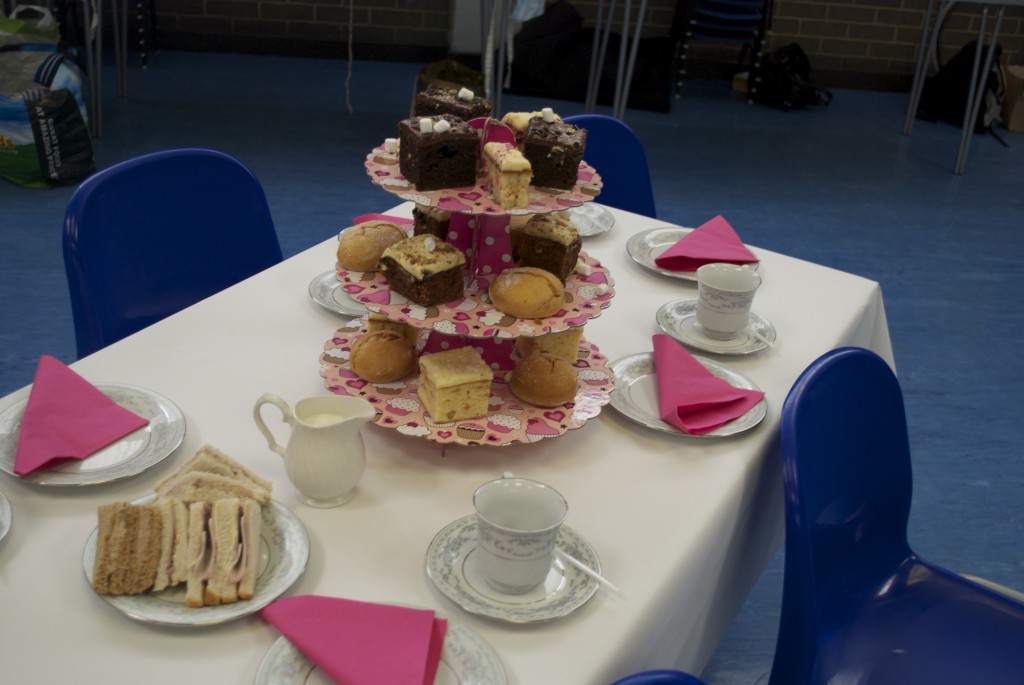 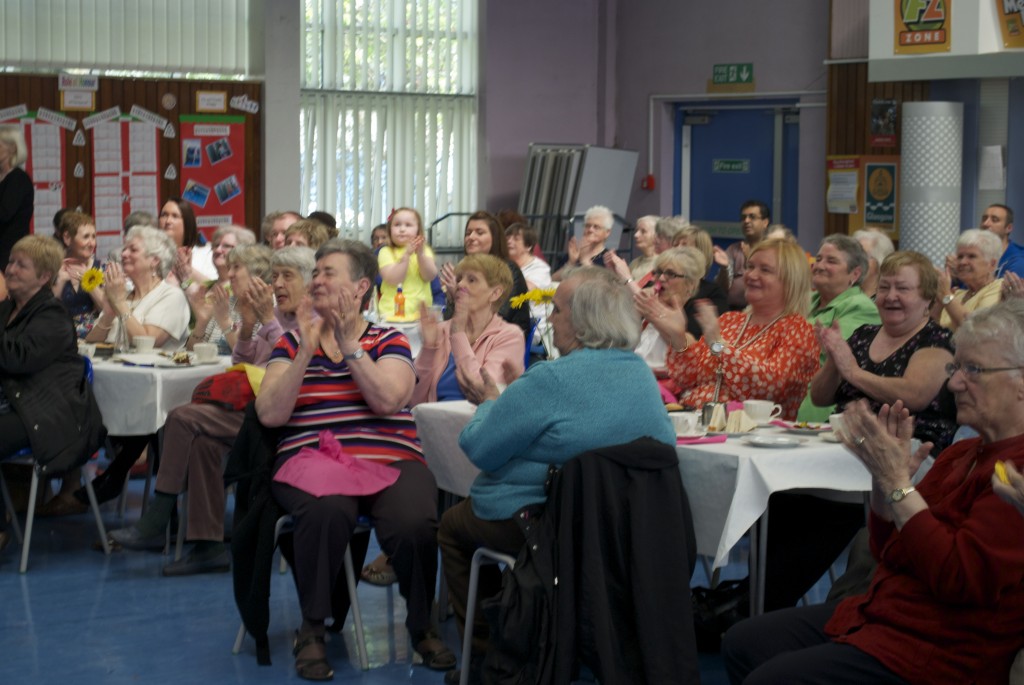 Headteacher introduced the day, and welcomed everyone to the school. She explained that she wanted the school to embrace everyone in the community and that the children wanted to open up a new onversation with the older members of the community.

Then, the children and older people had a chance to get better acquainted. We had borrowed some ‘Reminiscence Kits‘ from the Open Museum to help stimulate conversation – as well as games and toys from Playbusters. There was soon lots of chatter, laughter and discussion. We then asked the group to answer the following questions:

The answers were varied! People wanted to share skills and experiences from old Glasgow street songs, to rap, dancing, self-care to computer and technology skills. So, we’ve lots to work with! The next stage of the process will be to analyse the different skills and activities that people have and are interested in and to match them up. Overall, there was encouraging enthusiasm and willingness from the children and older people to learn and do things together.

What we are beginning to see is that the process of developing this idea is just as important as the final outcome. These processes have the capacity to create new roles and relationships, develop assets and capabilities and/or better use assets and resources.

Here are some comments from the evaluation forms:
I learned:
“that I belong to a whole community”
“that the children are as enthusiastic as I am”
“rather than learn, I was reminded of lots of things I had forgotten”
“that kids enjoyed joining in with older people”
More photographs from the day available here: http://www.flickr.com/photos/openlx/sets/72157633528622735/
Thanks to all those who helped to organise, get involved and make the day a success. In particular, thanks to all the children at Blackfriars Primary School, the older people who attended, Dixon Carer’s Centre and the organising committee (Victoria McAlpine, Mrs McCleary, Mrs Collins and Rhoda MacLeod).
Tags:childrenintergenerationalmemoriesolder peopleschoolyounger people