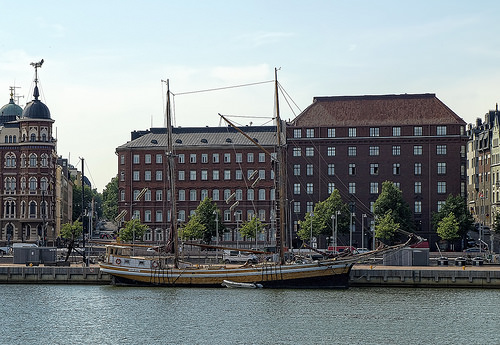 Photographer Arno Rafael Minkkinen gave a speech about photography and innovation which we feel could be relevant to the work we do here at Iriss. His theory? That innovation doesn’t necessarily always come from the road less travelled, but from re-travelling routes over and over to feel inspired.

Minkkinen’s metaphor for creativity is the Helsinki bus station.

Helsinki bus station is the origin of lots of different buses. But despite each bus having a different destination, each bus takes the same route out of the city for at least a kilometer.  It is only after this first kilometer that they begin to go in different directions.

Despite there being a variety of buses, each reaching different destinations, each bus shares the same first kilometer of its journey, no matter its destination. This means that even though people are going on vastly different journeys, the journeys all seem identical at first. The sights, sounds and experience is identical and feels too familiar to be inspiring.

The instinct when a person realises that they are on the same route as that they have have seen before, is to hop off the bus and return to the station, to take a different bus. The passenger wants to be inspired by new sights, to do new things. But, of course, the next bus from Helsinki bus station takes the same route.. And the cycle continues.

So what needs to change for inspiration to happen?

Stay on the bus!

Minkkinen suggests that creativity emerges when you stay on the bus, and begin to see the same sights from a different perspective. Old sights are renewed through the journey and the bus ultimately continues to a new destination.

Staying on the bus is a challenge because it feels as if creativity can only emerge from the new. But it’s from the repetition of similar routes that creativity really emerges.  From Minkkenen’s perspective, “we should stay on the bus and commit to the hard work of revisiting, rethinking, and revising our ideas.” The act of revisiting and revising isn’t ‘new’, but innovation doesn’t always emerge from new ideas.

What does this mean for us?

A strive to be ‘new’ shouldn’t be at the expense of revisiting existing routes. Often, at the beginning of a project there is enthusiasm for new approaches and a reticence to revisit old ideas. For example, we may not want to engage or consult with a group if we have recently done so, or we may not want to address an issue where there has been other activity.

Often, creativity is born out of revisiting and revising old ideas, staying on the bus rather than looking for something new.  The challenge of the big idea was to stick with the process, examining and reexamining an idea of community engagement and better lives.

Reflections on the Big Idea

For Iriss, ‘staying on the bus’ was about pushing for collaboration and partnership throughout the project, even when it felt repetitive. The feedback from our very  first event was that the model collaboration we were describing was ‘old news’, and our response was to stay on the bus and push for more meaningful and more effective collaboration through partnership.

In fact, our role was to challenge and reframe existing partnerships, asking about origin, power dynamic and reach in order to broaden our ideas of partnership beyond organisational structures. We wanted for people to view partnership working from a new perspective (place-based working) in order to find new direction. Within both project sites, we have continued to focus on the collaboration of multiple voices in order to improve outcomes for the people who live and work in that area. At times, this has meant revisiting existing data and asking new questions – an act that requires the careful balance between ‘engagement fatigue’ and well, new roads.

The frustration and repetition of this approach has at time felt draining, but we know that staying on the bus, we hope to finally arrive somewhere new.