Yesterday I attended the 4th National Co-Production Conference in Glasgow’s Royal Concert Hall. I was joined by colleagues at IRISS and Hot Chocolate (who are involved in IRISS’s Relationships Matter project).

This event was hosted by the Scottish Co-Production Network:

The Scottish Co-production Networkis free and open to anyone who is interested in co-production in Scotland. As a member of the network, you will be invited to learning events, network meetings and be able to take part in discussions and information sharing on the website. In order to ensure the network is effective in developing practice around co-production in Scotland, members are encouraged to contribute to the network by sharing their learning and experience through the online discussions, attending meetings and sharing useful information and case studies.

If you would like to join the network you can sign up here – it’s free and only requires basic information.

Across Scotland people and communities are continuing to work with local services to achieve positive change through co-production. This event sought to bring it all together, allowing delegates to learn from each other and plan for the future.

It was an energetic and inspiring event with evident passion for change from the people in the room. 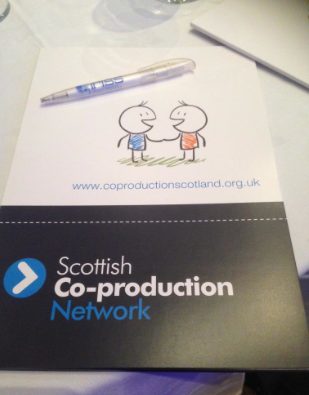 The day started with a welcome from Catriona Ness (co-chair of the network) who set the scene for the day by discussing the importance of involving people who use services if we are to make positive changes in Scotland!

This was followed by discussion from Fiona Lees (Chief Executive East Ayrshire Council) about positive examples of how co-production approaches are working locally with great outcomes.

There was a buzz in the room and everyone was clearly excited about the possibilities as they went to their first workshop.

Workshop 1 – What Can Scotland Learn From International Approaches to Co-Production: What to do and What to Avoid? – Governance International

The first workshop I attended was facilitated by Tony Bovaird of Governance International.

In this session we were split into 8 groups to explore key questions around co-production and share learning amongst our groups.

Some of the topics we explored, and may be useful for you to consider in your own work,  were:

Discussion in our group focused on a need to move from just co-designing to also co-assess and involve people who use services throughout our work as equal partners – not just in one of the four “co” phases.

Following this session we had a facilitated discussion from Gerry Power (Deputy Director, JIT) about the frustrations we all face when working together on co-production projects.

Common themes included: fear; money; time; only working with those who are already ‘converted’ to the idea of co-production; not being able to engage the “unusual suspects”; undervaluing people’s skills and expertise.

Following this session, it was time for lunch were I was pleased to catch up with a number of people who had been involved in IRISS’s Plan P, Hospital to Home and Experience Labs projects. It is encouraging to see they are all continuing to embrace co-production!!

After lunch we were in for a treat with a hilarious session from Gillian Grant from Universal Comedy. It was brilliant, clever and funny! It was a pleasant surprise to be at an event that values this kind of input in their program! It was certainly well received by the delegates!

Workshop 2 – From Patchwork to Supportive Net; Developing a Future pathway for Respite and Short Break Provision in Dundee

For my second workshop I wanted to learn from the work in Dundee by Animate who were discussing their evaluation of Dundee Carers Centre’s decision to provide short breaks/respite for adult carers in Dundee.

This was brilliant discussion about Dundee Careers Centre embracing the voice of their carers in deciding what ‘respite’ meant to them. We heard from one young woman whose ‘respite’ was a pair of waking boots that she can now use whenever the person she cares for is being cared for by someone else. She spoke with passion of the difference this had made for her as she can keep benefiting from them in a way that a standard one day trip wouldn’t have allowed.

We spent the second half of the session discussing all the people involved in co-designing a service of our choice. With my suggestion, the table I was at chose to explore the pathway from hospital to home for an unplanned admission. 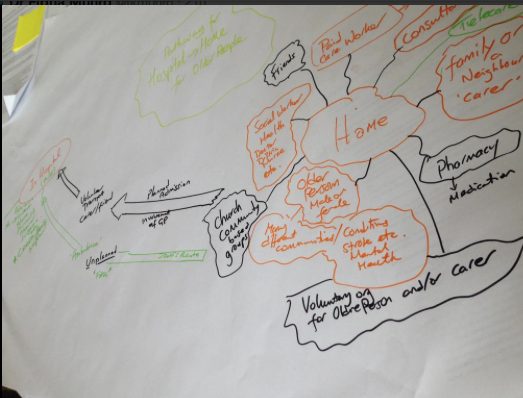 It was really useful to map all the people involved in the pathway and how the pathway would change if one person was removed – i.e. a carer, or district nurse for example. I found this process really thought provoking and useful and would definitely use it again with others.

During the afternoon two of my colleagues at IRISS, Kate Dowling and Judith Midgley also presented a workshop about their project Pilotlight.

Pilotlight set out to lead thinking on designing better supports for people across Scotland. Pilotlight co-designed four pathways to self-directed support focusing on mental health, risk, self-employment and young people in transition. The co-design teams involved people who access support, unpaid carers, local authorities and support providers. Together they tested and refined a model for successful power sharing, produced tools and resources and developed solutions for the implementation of self-directed support.

The day concluded with an overview from Dr Margaret Whoriskey (Director, JIT) and Sir Peter Housden (Permanent Secretary to Scottish Government). They spoke about the discussions and sessions from the day with hope for co-production in Scotland and the Network as a whole. 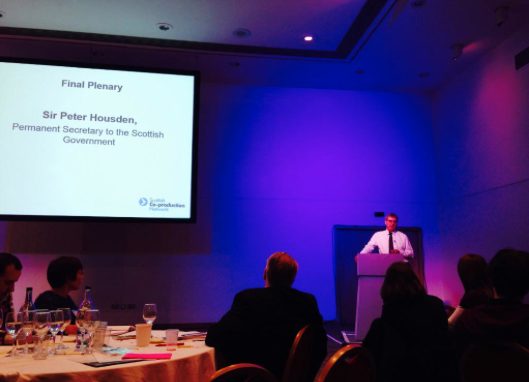 Catriona Ness summarised the day with reference to Mother Teresa and the notion that, by all working on our own co-production projects, together we can make a difference in Scotland for the people who use and provide services.

We ourselves feel that what we are doing is just a drop in the ocean. But the ocean would be less because of that missing drop.