The following Scottish libraries have apps for Apple (iPod/iPhone/iPad), Android and Blackberry devices

“Established in 1991, Augmentative Communication in Practice: Scotland (ACiP:S) is a national network that links together specialist AAC services and professionals; children and adults who use AAC (and their families); statutory services and voluntary agencies; and that provides resources, information and support.”

In 2012 ACiP:S had a study day, “Using iPads in AAC” and the papers from that day can be downloaded. What’s useful is that they have many case examples of using particular apps with different people and seeing pros and cons for each individual.

A common finding was that tablet devices (compared to smaller iPod devices) were preferred for children just starting to learn language skills and those with poor dexterity as iPads have larger screens making them easier to use and read but at added expense and they are heavier to hold if no surface is available to rest the tablet on. Accessories used for making devices easier to hold for children and to provide stands for working at a desk included the Big Grips cases.

Here’s a list of some of the apps that this group has documented in case studies.

Searching for synthetic voices for reading out text via Text-To-Speech (TTS) or speech synthesis systems found a Scottish company called CereProc. For a number of years they have been providing voices for desktop computers and now they have released versions that work on the Android platform for tablets and some of the newer and higher specifications of smartphones. This technology has come on in leaps and bounds in recent years and although not perfect and pronunciation may be a bit off for some words,  it’s certainly improving over time and may be an option for anyone wishing to have a device speak on your behalf.

There are some limitations like the hardware volume of the device will limit how loud the spoken sound may be which might not be loud enough in busy environments.

I’ve recorded examples of the synthetic speech that can be used on Android see the demo at the end of this post.

Tech note: In my tests I’m using a Google Nexus 7 tablet which you can currently buy for around £200.

N.B. The way the Glasgow voice is presented on the Play store it seems to be intended as a “jokey” example. This is a pity and don’t let that put you off as it does do an surprisingly good job of pronouncing in the Glasgow Scots dialect. In our example of Pros and cons of autism alert cards and travel cards one point raised was

Maybe more middle-class people might find the Idyacy Dodo Glasgow voice humorous but if you come from a more working-class area of Glasgow using some of the ‘posher’ Scottish voices like Stuart might make you the odd one out and possibly lead to mockery. So a lot depends on who you are surrounded by and the situation. Having the ability to switch between formal/informal voices easily could be an advantage in e.g. the workplace or interview situations vs. at home.

Here’s an example of how your text to speech section might look if you’ve installed a few different voices. 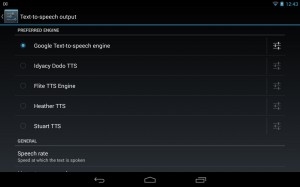 On Android there is a device-wide “TalkBack” option which is really intended for blind or low vision users – this will help navigate the device by reading out app names or notifications etc. However, Android doesn’t quite seem to be at the point where any text within any app can be dictated, it depends on whether the app developers have added support for it. So to really make use of installed voices you need to look for apps that support text to speech.

Audio recording from the output of the tablet device speaking some sample text using CereProc Scottish Voices for Android [MP3].

“The Scottish Intercollegiate Guidelines Network (SIGN) develops evidence based clinical practice guidelines for the National Health Service (NHS) in Scotland. SIGN guidelines are derived from a systematic review of the scientific literature and are designed as a vehicle for accelerating the translation of new knowledge into action to meet our aim of reducing variations in practice, and improving patient-important outcomes.”

If you want to know about a particular health condition the guidelines can be very helpful for giving you an overview and an indication of potential therapies that may be available. For those in Social Care/Work they could help you understand treatment plans of your service users e.g. if your autistic clients have comorbid conditions such as epilepsy or depression. There are over 100 guidelines available and the guidelines are provided as downloadable PDF documents.
There is a free SIGN Guidelines app [Android]  and  SIGN Guidelines app [Apple]
They currently have one guideline and an app specifically for autism in children. 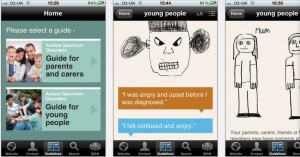