This is a worked example to try and find an example of an approach that might help with existing problems giving a destination on Glasgow buses for those with travel cards (see Pros and cons of autism alert cards and travel cards for details).

In computing we normally call text that’s to be displayed in large lettering a ‘banner’.

So I did a search on the word ‘banner’ on the Google Play App store. And though not all match our intended use there are some that would seem to do what we want. Now if you’ve never downloaded an app from an App store what you very commonly find is that apps for free may have some advertising within them that may or may not be a barrier in what you want to do, mostly but not always paid apps don’t usually have adverts and will often have a larger range of things the app can do – we call these ‘features’.
N.B. If you have photo-sensitive epilepsy be very careful if you try these banner apps out. Most of them will, as a demo, scroll text quickly, some will flash or blink.

I was specifically looking for an app that might provide a banner of large text in clear type that could be read from a distance and in low-light conditions. This could mean that your phone/tablet could be held up to e.g. the bus driver to show what destination you want. Because place names can be long and won’t always all fit on the screen the text needs to be able to animate or scroll so the entire name can be shown. To get the maximum amount of width for text it helps if you turn the device on it’s side with the longer edge at the bottom, shorter on the sides i.e. ‘landscape mode’.

The following sample can display text or can speak short phrases. N.B. There are literally thousands of apps in the app store, I’m only using this as a worked example.

This particular app is free but be aware there is a little bit of advertising. This app allows for up to 15 phrases to be stored and reused though you can change them at any time. You very simply tap on one of the rows of text and type in what text phrase you want to use. In the settings for the app you can change the size of the text, scroll speed and background and foreground text colours, I’ve chosen a blue background and white text in my demo.

You tap on the letters ABC in the middle of the screen to indicate you want to display a banner in solid lettering. 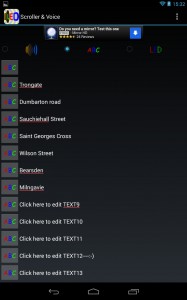 To display a banner, tap on the letters ABC in the square to the left of the text phrase you want. Screenshot shows a part near the beginning of “Sauchiehall Street”. The text fills the entire width of the screen and then scrolls the phrase continuously until you tap the screen again. 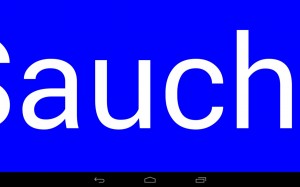 If you were using the same destinations repeatedly then using the app would be quicker as the text would already be entered so you would only have to tap the square ABC. This app will use the voice you have selected in your accessibility settings (see How to…Scottish voices for text to speech on Android for more details)