This project seeks to align health and social care perspectives by focusing upon person-centred practice. Therefore this project is exploring the application of co-productive approaches (commonly referred to in the social care sector), and improvement methodologies (commonly referred to in the health sector). This section describes how co-production and improvement methodologies have been interpreted for this project.

Definitions of co-production are not in short supply. The concept emerged in the 1970s when Nobel prize winner for economics, Elinor Ostrom, and her team at Indiana University, used the term ‘co-production’ in a series of studies about the Chicago police. In the case studies she highlighted the weaknesses of large, centralised public service delivery, observing how police officers had abandoned close involvement with citizens on the beat for policing at a distance in patrol cars. The word ‘co-production’ was coined to express what she viewed as the lack of close involvement or connection on behalf of the police (Boyle and Harris, 2009). Ostrom’s team defined co-production as the ‘process through which inputs used to produce a good or service are contributed by individuals who are not ‘in’ the same organisation’ (Boyle and Harris, 2009, p13). This implies that no one organisation or institution is responsible for delivering services; services are developed and delivered by professionals and citizens.

Later in 2000, the word ‘co-production’ was used by Edgar Cahn to explain his Time Dollar and Time Banking systems. He claimed that money was the reason human capacities were being devalued. These capacities include: caring for each other; coming to each other’s rescue; rearing infants; protecting the frail and vulnerable; standing up for what is right; opposing what is wrong; coming together to meet agreement; and acting as guardians of what we feel is precious. In his opinion, co-production redefines the connection between the world of market and non-market, and sets the terms on which the two economies need to relate to create a world that rewards altruism and care as much as it rewards competitiveness, aggression and acquisition (Cahn, 2004).

Boyle and Harris (2009) assert that co-production is central to growing the ‘core economy’ and that it encourages equal partnership as opposed to just ‘service user involvement’ or ‘citizen engagement’. The ‘core economy’ was a term introduced by an economist Nevan Goodwin, who used the analogy of a computer operating system on which systems work. The ‘core economy’ or operating system comprises family, neighbourhood, community and civil society (Boyle and Harris, 2009). This marries with the sentiments of Bovaird and Loeffler’s (2013) definition of co-production as ‘…professionals and citizens making better use of each other’s assets, resources and contributions to achieve better outcomes or improved efficiency’ (p23). The professional expertise of the professional is partnered with the lived experience of the person. These partnerships are based on four values (Horne and Shirley, 2009):

In essence, co-productive working places more emphasis on ‘relational’ rather than ‘transactional’ approaches to delivery (Needham and Carr, 2009, p3).

The Co-production Star (Governance International, 2014) identifies a range of service activities which can be included under the co-production umbrella. These are: co-commission, co-assess, co-design and co-deliver. 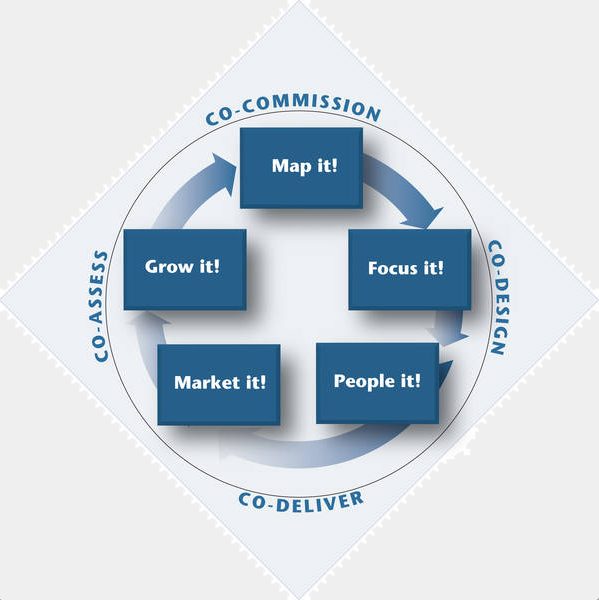 The Improvement Guide (2009) identifies five fundamental principles of improvement: (i) knowing why you need to improve (ii) having a feedback mechanism to identify if improvement is happening (iii) developing an effective change that will result in improvement (iv) testing a change before implementation (v) and implementation.

The guide goes on to describe The Model of Improvement, which comprises three questions and the PDSA cycle as a framework for applying the five fundamental principles.

When the answers to these questions are established, a PDSA/PDCA cycle  – ‘a systematic series of steps for gaining valuable learning and knowledge for the continual improvement of a product or process’ (W. Edwards Deming Institute) – is used to action the changes. This cycle is also known as the Deming Wheel, or Deming Cycle as the concept was first applied by Dr. Edwards Deming in the US. PDSA encourages small-scale changes in a process, as well as a way to analyse changes and spread the process throughout the system. 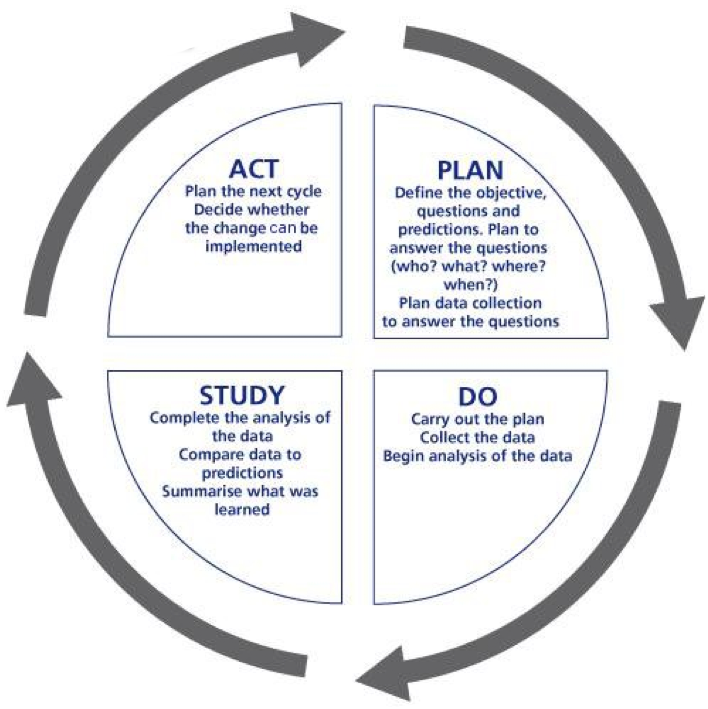 We found there has been little evience shared of co-production and improvement methodologies being used together, so we spoke to several people who have applied this approach to learn from their practice, and designed our own approach for this project.

I designed and led this work, and worked in partnership with the Health and Social Care Alliance Scotland on the People Powered Health and Wellbeing Programme. At IRISS I am a member of the Evidence Informed Practice team. As part of my practice I believe we need to optimise the knowledge and expertise by finding new ways to value and share it - or ‘remix it’ to find new solutions.

I supported Kerry in the running of this project. At Iriss I work in the Innovation and Improvement Programme and am a dedicated learner and a proud generalist.

I authored the definitions of co-production and improvement methodology and produced the audio content on the 'Approach' page.

I managed KiP when Kerry went on maternity leave (Congratulations Kerry!), and conducted the evaluation of this work with Rikke.