To start the day we all start together and shared what had happened after we had taken the mocked up version of our ideas out of the room and tested them with care leavers. Someone from each of the 4 idea groups was asked to feedback on what had happened in the last two weeks using the mocked up idea, how this made them feel and what they thought they needed to get out of todays’ session to move the idea forward. The group at this stage supported one another with support, advice and suggestions.

Unfortunately no young people were able to make this session so feedback and discussion (although useful) greatly missed their voices. This also had an impact on the rest of the day as practitioners were not so keen (rightly so) to develop the ideas without care leavers feedback and perspective. 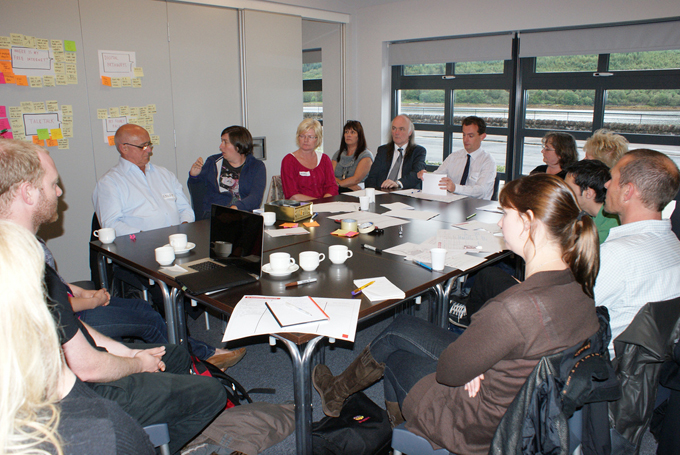 Catch up on the ideas

Talk Talk (formally known as ‘Proactive not Reactive’ and ‘Link’) 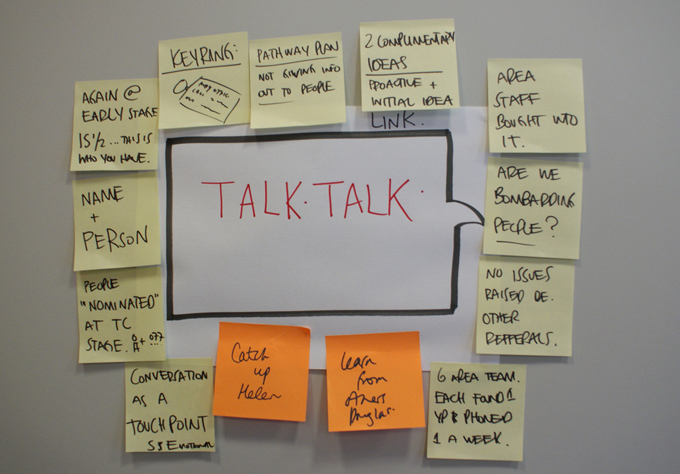 This team was lead by a Service Manager so the testing involved one staff member from each of the 6 area teams identifying care leavers who had used/were using their service. They had arranged to call them once that week and see how they were going in their new place. Each time someone phoned they had managed to speak to a young person.

The Service Manager felt he had had a positive response from service staff around the idea and said no issues had been raised by young people they had spoken to on the phone. On reflection he thought care leavers may speak to through a Throughcare and Aftercare worker if they did have any issues. Other comments from people in the room were that just talking to a young person is good enough, and should not be undervalued, whether they had something to say or seem to appreciate it should not matter too much.

Some things to note about this idea from the testing were that it was felt the success of the communication would depend on the young person and what stage they were at in their life. However it was noted this was just the beginning of the testing phase and through it was a useful idea both to keep lines of communication open with care leavers so that they don’t feel isolated and well as help to develop the service using their feedback.

Lots of ideas were given to this team by people round the table around taking the approach and other services developing it too, however there was some concern that each care leaver may be flooded with calls which some people thought might not be necessary, however others thought that even if a young person does not pick up at least they know you have called and through about them that day. 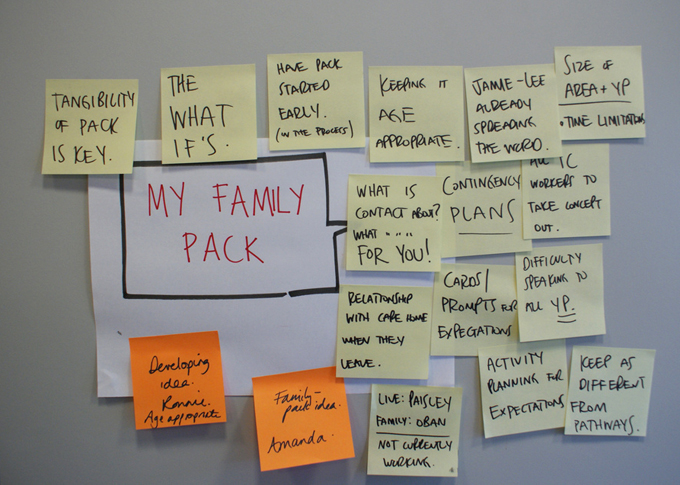 A Throughcare and Aftercare worker spoke about the Family Pack. She said that she had worked with one young person from the project on the pack, and shown it to other care leavers to get their feedback too. She had found this difficult as care leavers are located all over Argyle and Bute and she was disappointed she had not been able to develop the pack further in the past two weeks.

She said she was disappointed with the feedback she had received. Most young people had said that they thought they had outgrown doing this kind of work with their Throughcare workers and that he/she would already know a lot of the things covered in the pack, so they found it rather repetitive. However interestingly when the pack was shown to residential workers they seems to think it would have a place in children’s homes to support young people to think about contact with their families when they are first taken into care. Also one care leaver on the project had mentioned to a residential worker where she lived that the pack she was working on would help her get the access she wanted with her family.

I found the feedback from testing this idea interesting as it was one of the most popular ideas in the workshop, so goes to show the important the of testing an idea quickly is before it is developed further.

The feedback received about this ideas may also be due to the fact that Argyle and Bute have 2 Throughcare and Aftercare workers for the region. Therefore it may be understandable that workers may already know this information. This may not be the case in other regions of Scotland where young people can have several Throughcare and Aftercare workers due to local authority boundary changes, restructuring and staff turnover.

Where is my free internet 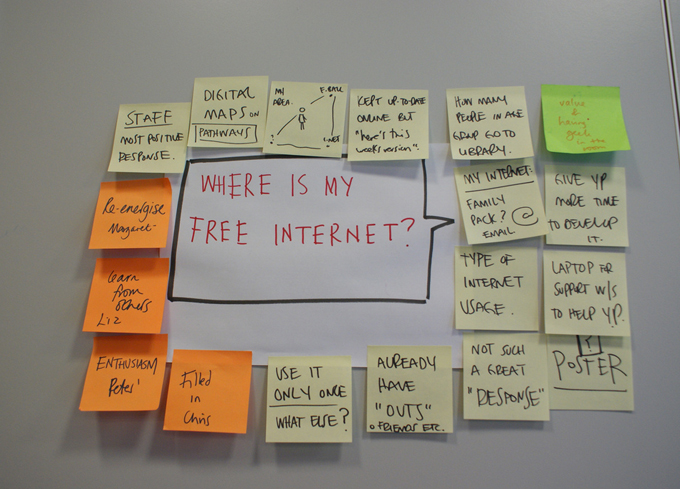 This group were unable to test the idea out with any care leavers but did speak to a number of young people. One member of the group mentioned that she had found it hard to bring up the idea in conversation or ‘tag it onto the end of a conversation’ they were having in relation to the service she was providing.

Some of the feedback was that service staffs seemed to think this was a good idea more than young people, and it seemed to be a tool that could be used once (as the towns in Argyle and Bute are relatively small), so once internet resources had been identified the tool may not be used again.

However what seemed to happedn (possibly as a result to fthis) was that other resources were included in the map, such as a the community centre and library. It was also used to ask young people to make their own networks with in the towns.

This groups felt quite disappointed that their idea had not taken off once it left the workshop space, but saw opportunities to learn from the ‘mistakes’ or assumptions they had been engaging with, and were pleased they had more time to develop it more. 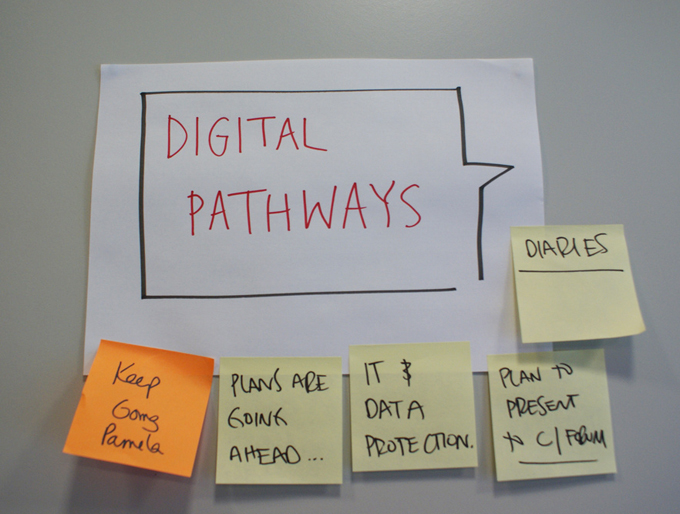 This group seemed to take a more traditional approach to developing the idea with more research and connecting into the working groups that are established in Argyle and Bute to develop ideas. They had been working by email in the last two weeks to create a pitch for their idea, planning a testing site for the work and identifying possible funding streams.

So afte the fedback session everyone broke up to work in their groups. 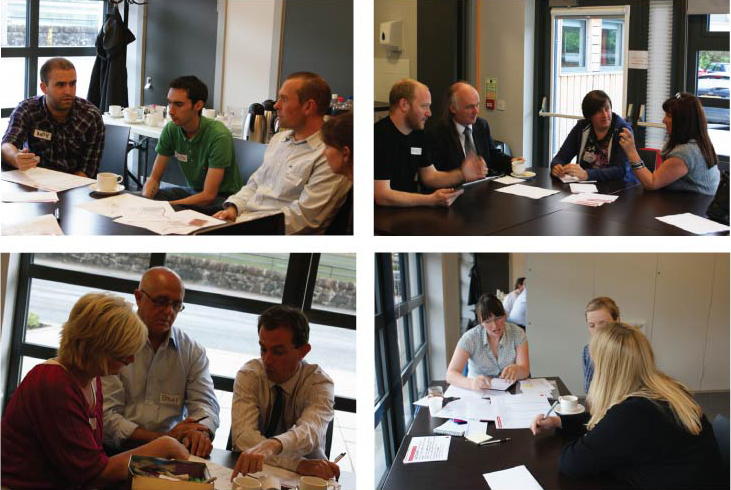 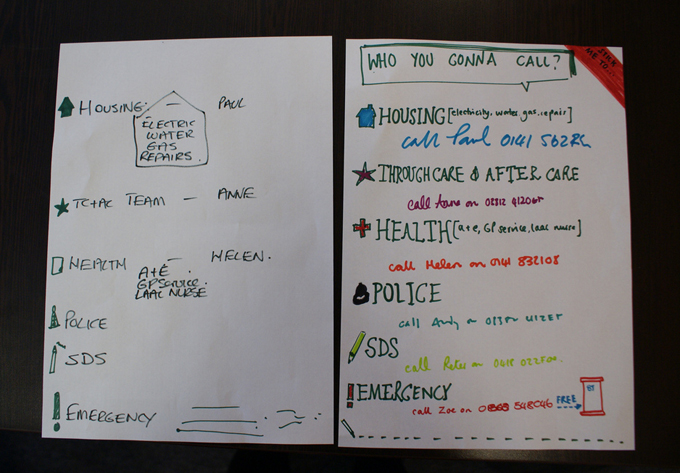 Developing the Friends and Family Pack 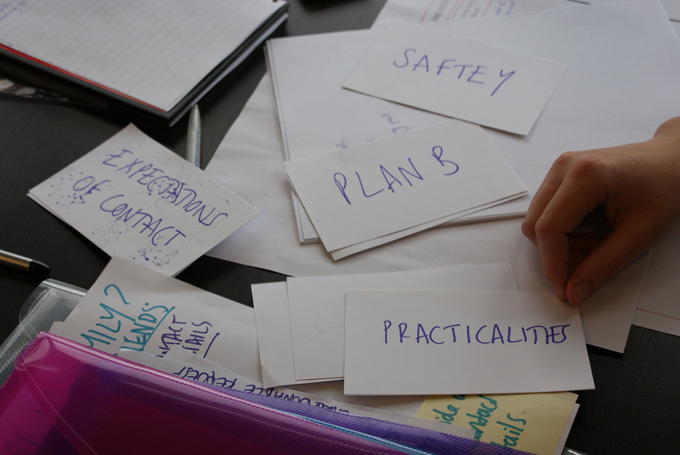 Developing ‘Where is my free internet?’ 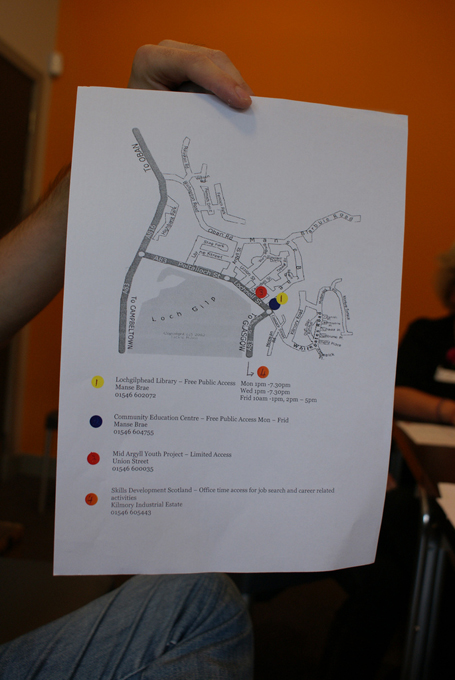 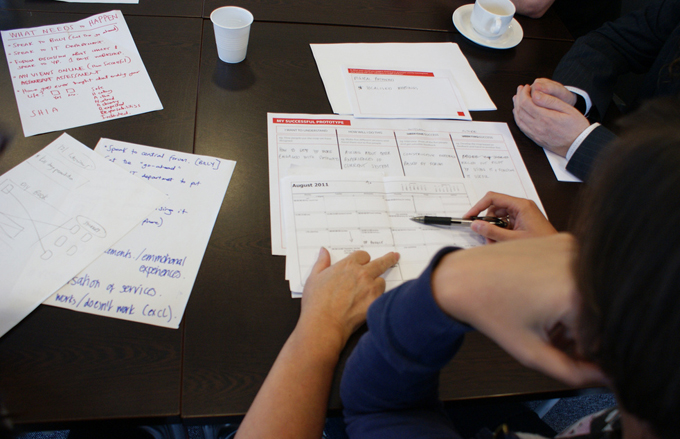 Thanks go to Snook for the photography