The second workshop was held at the 3 Villages Community Hall in Arrochar (all the workshops will be held here – great venue!). We had a smaller turnout this week due to holidays and work commitments, but despite this, saw a mix of practitioners with different backgrounds and knowledge, as well as care leavers attend. In response to being asked the week before to give people an opportunity to get to know one another, we did round-the table introductions where people introduced themselves, shared a little bit about what they did at work, and a little bit about a personal interest not related to work. Lauren from Snook drew what she heard so you can see us all in the image below. 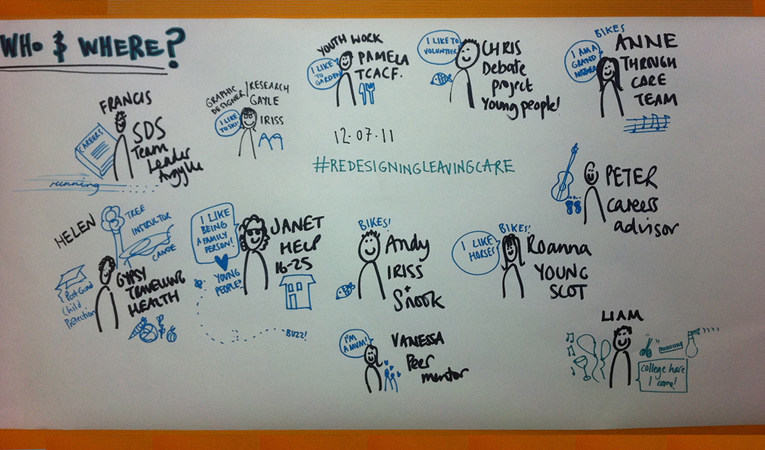 This session worked by using the tools and language we had been introduced to the week before, but this time they were applied to the Leaving Care service.

We broke up into two groups for the first activity; Chris, a Youth Worker from The Forum and The Debate Project, facilitated the session with care leavers, and Pamela from The Forum, facilitated the session with the practitioners. Different activities were planned for each group, and as I was only one in the care leavers group, Pamela from the Forum ha agreed to add a comment about what happened in the practitioners group. Everyone is welcome to add their recollections(!). 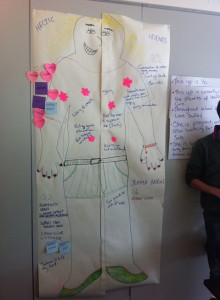 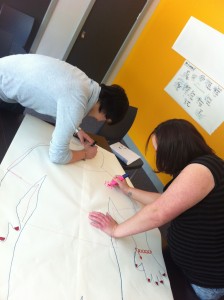 We created Jemima Bairns, who was 16, lived in foster care, was pregnant and had been bullied at school, which led to her not doing so well in education. We decided that Jemima was a shy girl who was wary of people but had lots of friends. She identified more with adults than young people (as that is who she has most contact with), has support from her boyfriend (Jack) with the baby, likes to go out on a Friday night and tends to be too proud to ask for help.

We agreed that Jemima’s life felt hectic and that she feels lonely, scared, anxious, excited, stressed, lost, relieved, worried and, in blunt terms, that she was s***ing herself about moving on from her foster carers. We thought she might need some kind of maternity grant, moral support, support from throughcare, more staff around and have someone to hold her hand when leaving care. Other things we thought Jemima (as a care leaver) might not have that other young people have were, connections to other young people, connections to other young mums, not being able to return home after she had left, and was likely to face a riskier future.

By creating Jemima, we were able to talk about different care leavers experiences but focus upon Jemima. For the rest of the day, she became our reference when we were talking about this transition. However, she was also used to stimulate debate between both groups when the practitioners were invited to join our group and look at what had been created. The practitioners asked questions about what was written about Jemima, told us their own experiences of working with care leavers and pointed out things that were new to them. For example, one practitioner mentioned that she had never thought about the possibility that care leavers might be more comfortable talking to adults than young people of their own age. 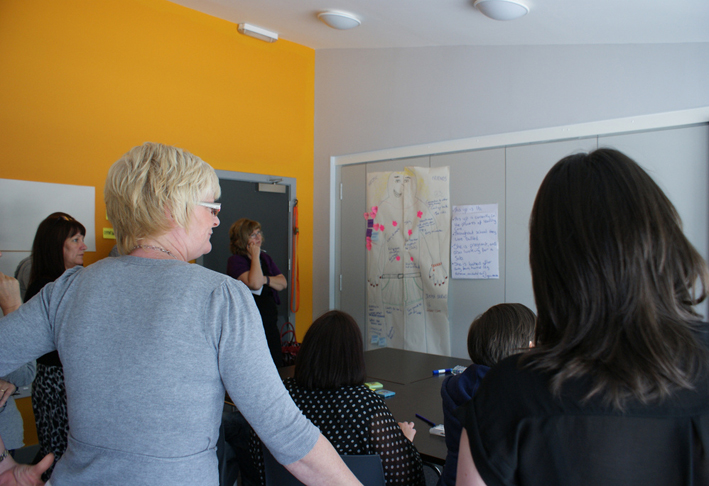 The practitioners were asked to do a similar thing to the care leavers. Pamela will post a comment at the bottom of this email to explain this part of the process.

These are photographs to show what was created during their conversation. 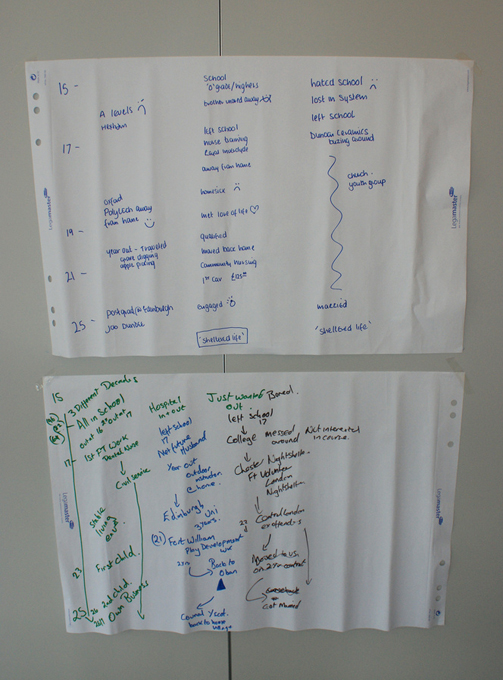 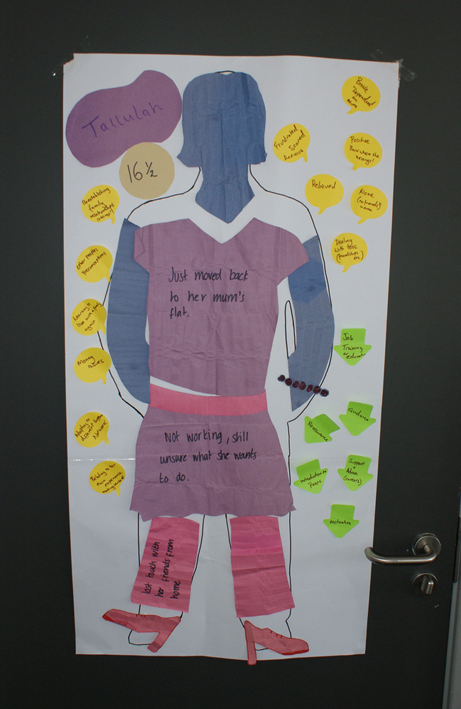 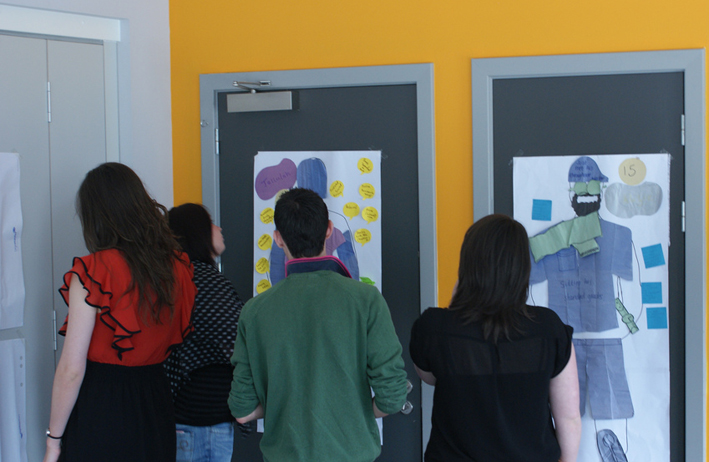 When the first activity had come to a close, we all got together to deepen Jemima’s life story by mapping it along the lines of a journey. We as a group had already decided upon some of the things that had happened in her life, so this part of the workshop was used to flesh out which services she came into contact with and how the contact was made, supported her (or did not), and was delivered. 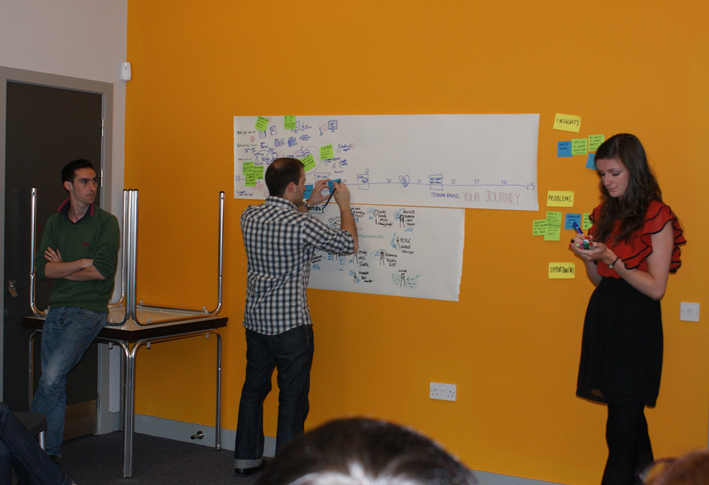 I think this activity allowed for a lot of knowledge sharing between everyone in the room. We were able to explore the ways in which services linked to care leavers, if that contact was facilitated by a worker, or if was expected that care leavers should make contact with certain services themselves.

We also learned about the different systems services use to provide support to care leavers, where and when the service starts and stops providing that support. Some healthy debate was had around why these systems were used, and, if and how that could change. One practitioner acknowledged that some elements of their database system could be changed to ensure care leavers stay on their database for longer.

We only got half way though the journey map as the discussion was so lively, and the problems and ideas that people encountered compelled them to share their perspective with others. You can see what we completed in this session below.

During the discussion, Snook wrote up the insights they had into the situation, noted down some of the problems that were arising, and opportunities they saw for change. 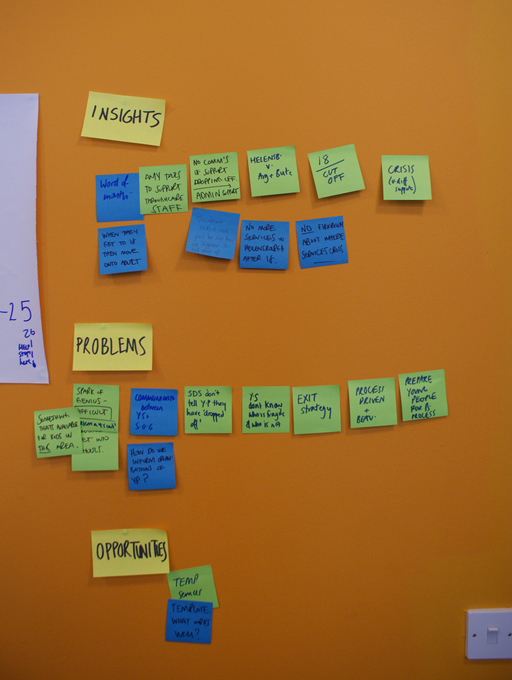 I think it’s fair to say there was quite a lot of sharing of perspectives and learning going on about the different systems that services use to support care leavers. One of the things that really stood out for me was when one of the practitioners shared the collective fact (after the first activity) that on reflection most of the practitioners didn’t feel they’d managed to ‘get their lives sorted’ until they were about 25-30 years old. It was noted that at the moment we are asking care leavers to establish themselves and their lives between the ages of 16-21.

Another reflection from practitioners was that they had not realised that young people may feel better able to speak to adults rather than young people of their own age, as they have so much contact with adults. 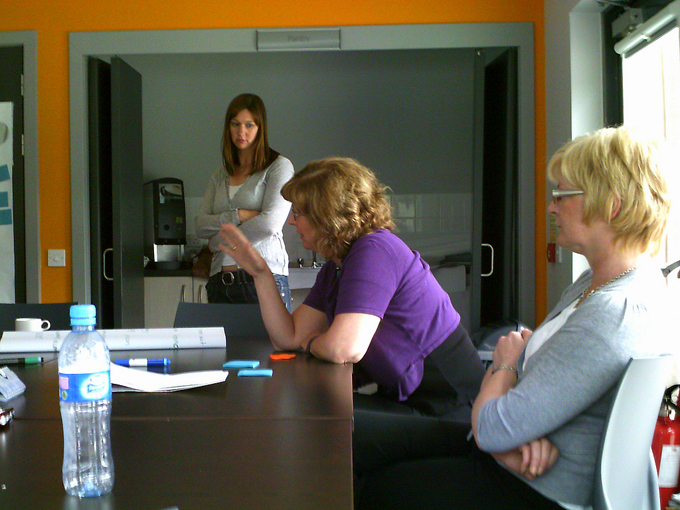 As might have been expected, changes in policy and better resources were spoken about by participants: the age of leaving care needs to be higher, accommodation resources that create a step change to living independently need to be established, and being able to return to care when needs be (as other young people are able to do) was highlighted. 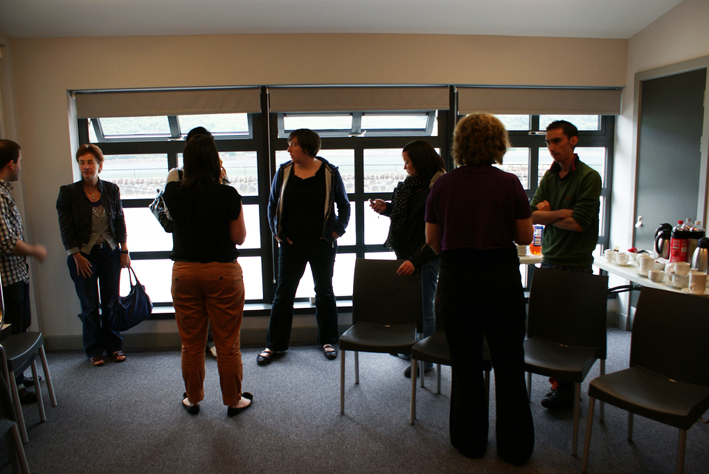 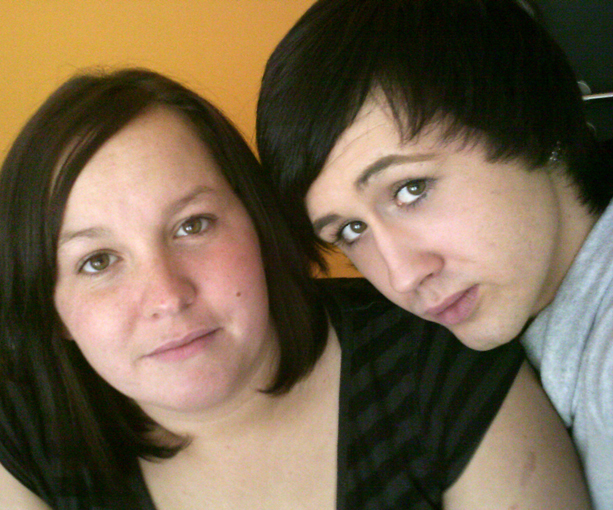 So next week we are working towards finishing the map and thinking of ideas that can respond to some of the problems highlighted in the map.

(All photographs are courtesy of Snook on this post)