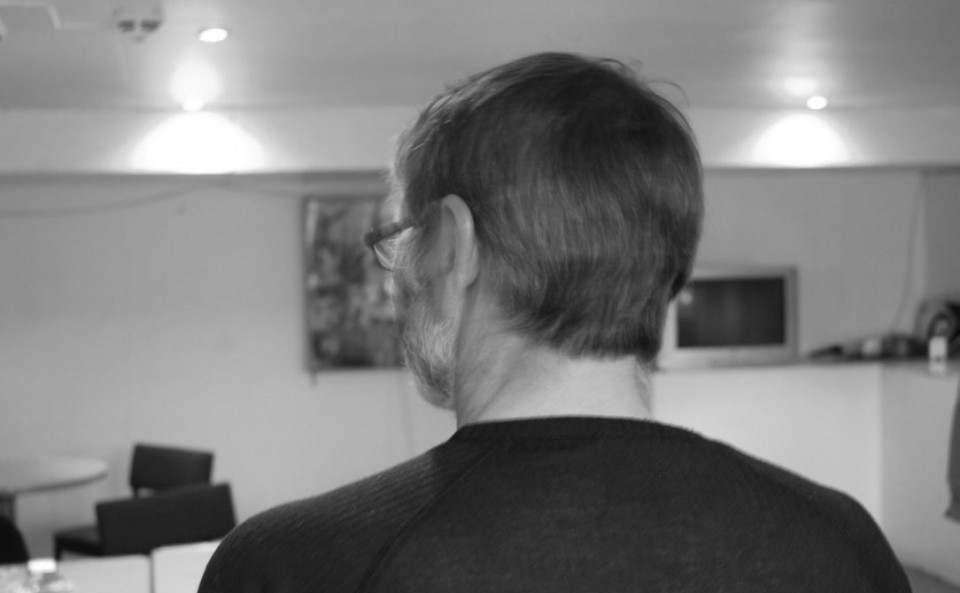 I don’t so much ‘work’ in a service, I have benefited from services, having been homeless myself and the commonality with many homeless people of PTSD (Post Traumatic Stress Disorder) and alcoholism. I’m part of an informal PTSD group that I started up with a couple of people, one from Aberdeen, one from Peterhead that I met at Hollybush House on a course on helping us to live with our condition.

PTSD is one of these things that if it’s caught in the very early stages it’s treatable. If it’s not then all you can do is learn how to live with it and a great part of the early onset PTSD is denial.  But what we do is we work with people, it’s all unofficial referral, you know, this is just street stuff. People that we know are homeless ex-army and we approach them and see if PTSD is a factor and that can take some time.  You can’t just walk up to someone and you say, ‘Do you suffer from PTSD?’  All you are liable to get is a broken nose, you know?  So it can take some time to build up that trust and eventually you get to a point where you can share your own experience, and if they pick up on that then great, if they don’t then maybe that’s not an issue for them.  We step back at that point because the three of us are more concerned with helping PTSD, putting them in touch with Hollybush House and that sort of thing, and if they are willing to, with maybe a 12-step programme and through people like Diane (from Cair Scotland)

It is absolutely pointless, we’ve found, attempting to help somebody that doesn’t actually want the help.  That can be actually counterproductive.

I’m involved as a member of several groups, although I kind of perform roles within them. I mean upstairs in the HURT cookery group, Des does the main course, Stuart does the starters or the soups, I do the puddings and the baking and that sort of thing, but I have stepped back from having an official capacity.  I’ve found that I’ve got too much on my plate to make too much stuff official if you see what I mean?  And it’s the same with the community group which the ADP is a funder of and supports gently. It’s community led in Insch, the Inspiring Insch, I’m there every week and I’ll perform a function every week but I’ve got no official capacity and that’s the way I kind of prefer it now. It works well for me.

We spent so much time bullshitting people in the past that when new people come into the group and they start bullshitting we can call them on it, you know?  We can see it coming before they even know what they are going to say themselves.  Sometimes you call them on it, sometimes you don’t.  If it’s the wrong time to call them on it, if they are not ready for that ego deflation, then you just let it go.  Knowing, being able to remember where our heads were and how we worked in addiction and in early recovery and it’s fully worse than when you were in addiction, trust me.

In most 12-step programmes a large amount of time is given over to making amends, but in most of our set programmes it’s recognising that the first amends that have to be made are to yourself. How can other people forgive you when you haven’t forgiven yourself yet?  It’s a very important thing to work with people on being able to forgive themselves and it’s not making excuses for them, that doesn’t work, that’s not making amends.

It’s accepting what you did and apologising to yourself for it, it’s a whole different ball game than making excuses.

I can only pass on what was freely passed on to me, I can’t add anything to it other than, this worked for me as it did for many thousands before me because it’s unchanged. I can only pass on freely what was given to me freely.  No more, no less.

The programme I’m on, which is the AA programme, all 12-step programmes are based on the same, that is the training, doing the 12 steps with another alcoholic and then taking that forward and, you know, doing it with a still suffering alcoholic and so on, and then he goes on to do it with somebody else and that’s how the whole, that’s how AA has grown from a few hundred in the mid-1930s to several, well a lot of millions, now.  There isn’t a country in the world without AA meetings in it, even North Korea, but they are underground, but they are there.

For me it was a gradual awakening that things were changing inside my head, you know?  Also people that knew me well, my own children for instance, started to include me back in their lives because I was changing to somebody that they wanted back in their lives.  Whereas I had pushed them away.  They got in the way of my drinking, which was the only medication I had to deal with my PTSD. That was my excuse. It turned out I was just an alcoholic and the two had to be treated separately.

It was a gradual awakening to the fact that I now had something to offer.

But ego deflation is a big part of the AA programme so that’s possibly why it is then a gradual awakening because the ego takes second place.

I believe the AA programme teaches me, I believe that to keep the peace of mind that I’ve got, the sobriety I’ve got, the new way of life I’ve got, I have to give advice away freely.  It was given to me freely by others.  The only trade in is that my sobriety is dependent on me helping others.  If I go back to being the selfish person I was before, and stop helping others, I will pick up a drink again and that’s a death sentence.  I don’t think I would have another recovery in me.

I’m 64 years old and I have just had the best 7 years of my life.  Now that would frighten most people to say that, ‘What did you waste the other 57 on?’ Well I know what I wasted it on and I can accept that.

I don’t regret it because all those lines that were drawn over those 57 years have created the picture that I am living in now and I like where I am now.

So I don’t regret the past, I don’t want to shut the door on it because I can use it to identify, for other people to get identification with both the PTSD and the alcoholism because they are two separate issues and I can help people with both of those.  Every life form on this plant is tied together in some way, we are all living organisms.

If we don’t help each other it doesn’t work.

I love the saying, ‘While I was drinking I judged myself by my intentions while the world was judging me by my actions’. I had to accept that the true me was displayed by my actions, because only by recognising the true me could I change it. The biggest barrier is self-ego, preconceptions. Balancing ego, or not balancing ego, utter dislike of oneself. It’s difficult for normal people to believe but you can be 100% ego driven, so fragile an ego that anybody even perceived to look at me the wrong way that was another fight.  And yet at the same time have a feeling of total and utter worthlessness.

Everything in an alcoholic’s life is a contradiction and I’m not saying that so you feel sorry for an alcoholic, that’s the last thing they need.  Sympathy gets nobody sober, just deeper into the bottle.  It’s a gradual process and it needs somebody that has already been through that process, I believe, to lead an alcoholic through it and I don’t think anybody, any professional, could actually be trained to a level to do that without having been an alcoholic themselves.

One day at a time

My future lies in going to bed sober tonight.  Tomorrow isn’t here yet, that’s it, it doesn’t go any further than that, sorry. Prudent planning, yes, for life, make sure I pay my rent at the end of the month.  Prudent planning but no, where life is taking me, that’s not in my hands.

All I can do is go to bed sober tonight.

Some others on the programme have become extremely good friends. I haven’t got that many. I’m only seven years sober myself and I only started to help others two and a half years ago and the first two were a complete disaster.  Partly my fault, partly they weren’t ready to go to the lengths needed and I would put any percentage share on that responsibility but I learnt a lot, often to say no when someone asks me for help if I felt they weren’t ready.

No one has just severed the relationship, you know, at the point where you sort of let go, you go and help someone else now, I’m always here if you need me but you go and help someone.  Nobody has actually severed that link, which is nice, other than those early ones that went ‘back out again’, but hopefully they will come back, that’s all we can do, is pray that they will come back.